Home-schooled teen Malachi Walker had plenty of free time on his hands after a painful sports injury forced him to sit at home for two seasons. As a starter, Walker was not accustomed to sitting out games after working hard to make the FC Dallas Select soccer team, the injury was a major setback to him psychologically and emotionally. It was the main thing he had going for him, as his family had only recently moved to Dallas from Tennessee, so the injury initially had him down and disappointed. Walker decided rather to invest in himself and his personal development than to become bitter about his circumstances. Walker decided to create something positive that could propel him, and others around him, forward. That something is his new book, speaking career and YouTube channel. The message and the metaphor have a Boomerang as the main talking point. 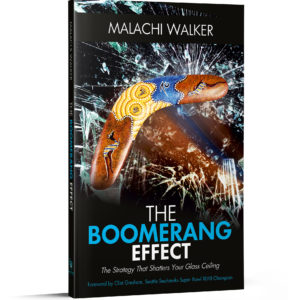 While home sidelined and not able to play sports the Dallas teen began following young Entrepreneurs on YouTube that inspired him to follow his dream and pursue and fund his passion. Not being able to compete or even practice was disappointing and almost debilitating at first but Walker decided to turn things around for the better. The result, the launch of The Boomerang Effect this Wednesday night in Farmer’s Branch at Brookhaven Country Club.

Initial Endorsements have been coming in from around the US and notable endorsements include Clint Gresham, Seattle Seahawks Super Bowl XLVIII Champion, International Speaker and Best-Selling Author of “Becoming: Loving the Process to Wholeness,” who has written the Foreword, JT Foxx, The World’s #1 Wealth Coach, who calls Malachi, “The Next JT Foxx!” and local Dallas Entrepreneur, Joaquin Calbazana, “When I first read The Boomerang Effect I said, ‘WOW, a 13-year old wrote this? I wish I had his advice 10 years ago when I started my businesses!”

The young Walker is no stranger to Entrepreneurship either, growing up in his parent’s home. His dad, Charlie Walker, is a successful businessman, investor and servant leader. His mom, Christina Walker, is a Vocal Performance Coach who coaches Keynote Speakers, Professional Communicators, Singers and Actors is the author of 2 books and recently shared the stage with John Travolta, 50 Cent, Calvin Klein and Randi Zuckerberg.

Not to be out done, Malachi is starting to make a name for himself, not only from his YouTube channel and his book, but also with his speaking in the DFW area. Recently, Malachi spoke to his teen peers at Legendary Youth, the youth ministry of Covenant Church in Carrollton and at the Intelligent Millionaires Network Dallas, meeting TV Producer, TV Personality and Serial Entrepreneur, Tommy Habeeb. Malachi was asked to speak from the stage during the strategy session and shared points from his book, The Boomerang Effect.

When asked if he knew writing the book would open up speaking opportunities Walker says, “The book really is written as a practical life resource and the fact that it has lots of cool graphics, bullet points and amazing takeaways sets it up for a powerful keynote talk or workshop, so no, I’m not really surprised, in fact I’ve been getting some positive feedback from other groups asking me if I could come share my story.”

“We are very excited about having The Boomerang Effect available for bookstore pickup and global distribution and the timing couldn’t be more perfect,” says Beyond Publishing CEO, Michael D. Butler.

“There is a huge uptick in Kid CEO, Personal Development and Faith Based Entrepreneurship genres and this book has all of the ingredients we look for in a successful book. There are some scripture quotations and positivity that give the reader insight into the author’s beliefs but it’s not a religious book. It is filled with practical “how-to” steps that make it marketable in multiple channels. The team at Beyond Publishing is very excited to add The Boomerang Effect to it’s growing list of quality books, especially books by young authors,” says Dallas based Beyond Publishing CEO, Michael D. Butler.

Beyond Publishing has had clients on CNN, Fox News, Dr. Phil, Tru TV, TLC, Disney, TMZ and other outlets. Butler went on to say, we are offering The Boomerang Effect ebook on Amazon for just $1.99 for one day only on Wednesday, June 27th to make it available to a larger world-wide audience, after that the price will go up. The print version will be available and shipped on July 4th.

Filled with practical calls to action and daily takeaways the reader is given the hands-on tools to shatter their glass ceiling and soar higher than they’ve ever imagined possible.

Here’s a glimpse at what the reader will find within the 200 pages of The Boomerang Effect: